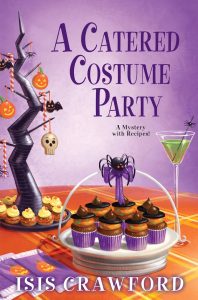 When sisters Bernie and Libby Simmons agree to cater an extravagant Halloween party in their little upstate New York town of Longely, they figured a ghost or two and a blood curdling scream might be part of the menu, but they never expected to be haunted by the deadly specter of murder…

Halloween is coming, and Darius Witherspoon isn’t giving up on his plan for a catered costume party—despite the recent disappearance of his wife, Penelope. He may be heartbroken, but perhaps throwing a big shindig in her honor will boost his spirits. He’s going to hold it at his stylish new co-op apartment at the Berkshire Arms, where the couple had dreamed of moving in.

“A Catered Costume Party” is the thirteenth in this delightful series by Isis Crawford. I love the characters, the snappy dialogue, and the creative plot twists. A classic cozy among the best I’ve ever read.
–Suspense Magazine

Darius hires Bernie and Libby to provide the treats. They’d prefer to avoid the festivities altogether. As far as they’re concerned, the Berkshire Arms is a haunted house—or at least haunted by the memory of the murder that happened on the site, when it used to be The Peabody School. But as always, there are bills to be paid, so they accept the job. And in the midst of the celebration, Darius is discovered hanging from a noose outside one of the ballroom’s French doors…

Was it suicide, induced by despair over his missing spouse? Bernie and Libby think not, once they read the note he left—which includes a sum of money and a request for them to “do something” if anything should happen to him. Now, once the serving trays have been cleared and the decorations taken down, it’s time for the sisters to unmask a killer…

Includes Original Recipes for You to Try!

Money is a little tight these days for sisters Libby and Bernie Simmons. They’re especially worried about paying the sales tax bill for A Little Taste of Heaven, their family bakery in the small upstate New York town of Longely.

So it’s understandable that Bernie jumps at the chance to cater a Halloween-themed costume party at the Berkshire Arms for Darius Witherspoon, a Manhattan gallery owner and treasure hunter who wants to show off his new co-op apartment. It takes some fancy footwork for Bernie to convince Libby to agree, since the last time they catered an event there, it was a terrifying experience for both.

There’s trouble right before the party when Darius’s wife, Penelope, disappears. To be honest, she disappears because Darius has hit her over the head, filled her pockets with rocks, and pushed her into the Hudson River. Playing the role of the heartbroken widower, Darius insists the costume party must go on as planned. Then, in an odd twist, Darius visits the two sisters and gives them a sealed envelope, to be opened only if something happens to him.

When it’s finally time to start the party, the host is the only one who hasn’t arrived. Awkward, yes, but Bernie and Libby just keep on circulating with their trays of hors d’oeuvres, even though they both have a bad feeling. Then the host makes a surprise appearance at the window, dangling from a rope and—you guessed it—dead. The police rule it a suicide, but the sisters aren’t so sure. And when they open the sealed envelope Darius has left for them, they find $5000 in cash and a plea to use the money to “find out what happened.”

“A Catered Costume Party” is the thirteenth in this delightful series by Isis Crawford. I love the characters, the snappy dialogue, and the creative plot twists. A classic cozy among the best I’ve ever read.

Reviewed by Susan Santangelo, author of “Dieting Can Be Murder,” published by Suspense Publishing, an imprint of Suspense Magazine.