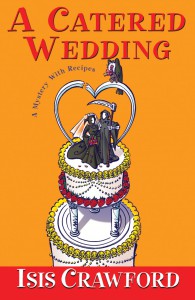 Bernadette and Libby Simmons have been working twelve-hour days at their store, A Little Taste of Heaven. In between whipping up sweet treats and catering high school graduation parties, the sisters have to fit one more event into their busy schedule: catering a high-society wedding that takes a very low turn…

Leeza Sharp is getting ready to have the wedding of her dreams. She’s got a $25,000 dress (gorgeous and made to order). A rich fiancé (head of a multimillion- dollar caviar empire) and a four-star menu (planned by none other than Bernadette and Libby Simmons). Never mind that she’s not really in love with her boring, bland groom-to-be. This is about as good as it gets for a country girl from Missouri.

But the dream wedding quickly turns into a nightmare. Just hours before she’s scheduled to walk down the aisle, Leeza takes an arrow to the chest – and drops dead. Now Libby and Bernadette have more on their minds than poring Cristal and cutting the wedding cake: they’ve got an archery-inclined killer to find.

The sisters suspect that Leeza may have been involved in a caviar- switching scheme, which would give several people a motive for murder. But the chef/ sleuths aren’t about to put all their eggs in one basket – there’s the up-for-grabs fiancé’s formerly frumpy secretary, the groomsman with the wandering hands, and, of course, the bereft husband himself. It’s up to Bernadette and Libby to get to the bottom of it – before the killer can hit another bulls-eye…

Publishers Weekly
“In Isis Crawford’s A Catered Wedding: A Mystery with Recipes, the lively sequel to her debut, A Catered Murder (2003), kindhearted caterer Libby Simmons and her savy sister, Bernie, investigate the murder of 27-year-old Leeza Sharp, shot through the heart with an arrow, shortly before Leeza’s wedding to the boring 53-year-old scion of an Estonian caviar dynasty. The sisters’ playful rivalry, clever dialogue and an eccentric supporting cast make for plenty of cozy fun.”